Main interest of an Integrated Biomass Logistic Centre (IBLC) in the olive sector is the exploitation of olive prunings. Olive prunings are treated as agricultural residues and burned in open fires or mulched into soil. However, they can be exploited in various ways and offer added value. Apart from the exploitation of olive prunings for energy purposes, the production of other bio-commodities such as particleboards, used in the construction and furniture sector, may be applied. In this light, AGROinLOG project that is funded from the European Union’s Horizon 2020 research and innovation programme, investigated the potential of producing particleboards from olive prunings by replacing common wood at 20 %, 40 %, 60 %, 80 % and 100 % rate.

Different samples of olive tree prunings harvested during the demonstrations in Agios Konstantinos, Central Greece (Greek demo area) in terms of olive variety, pruning thickness (pruning diameter) and presence of olive leaves, were used for testing the production of particleboards.

The steps of producing a particleboard included:

The obtained particleboards were tested for their tensile strength, thickness swelling, modulus of rupture and modulus of elasticity, moisture resistance and formaldehyde emission, in accordance with the current European standards, and compared with the same values of reference associated to particleboards produced from conventional wood material. 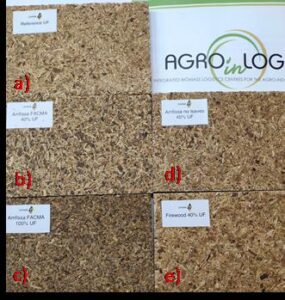 The evaluation of the results of the pilot tests and measurements has led to the determination of the maximum level of replacement of the wood with the material from the olive tree pruning without causing deterioration of the properties of the particleboards produced therewith, as compared to the conventional wood particleboards. It is possible to produce panels with up to 100% substitution of the conventional wood with olive pruning materials. However, they do not comply with the standards for particleboards. The mechanical properties of the panels are reduced by increase of the substitution level. This may be attributed to the higher amount of bark for all five samples as compared to the conventional wood chips, which are produced from debarked wood logs. On the other hand, particle board properties such as the formaldehyde emissions of the boards (along with the thickness swelling) are reduced by increase of the substitution level, which makes the panels safer in terms of indoor pollution and human health and more consumer friendly and attractive.

The use of biomass from olive tree (and possibly other species too) pruning may be one of the solutions to tackle the problem of timber shortage and the growing cost of it, due to the shrinkage of forests and the growing demand for wood to produce products and energy.

We use cookies to ensure that we give the best user experience on our website. If you continue to use this site we will assume that you agree.I agreeRead more